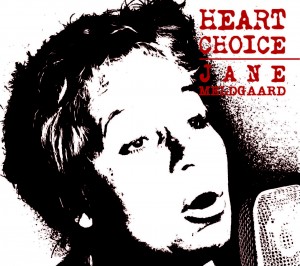 To make a Heart Choice can sometimes be a Hard Choice. But if you have decided to be true to your heart and to the wishes of your soul, you get to a “point of no return” where there is no other choice than to follow your heart, no matter what it says. One of the reasons why it can be so hard is that our hearts often want us to do things that our heads – representing common sense and rational thinking and acting – really consider stupid, thoughtless and dangerous. Since most of society – and perhaps even the people around us – may follow the rules of the head, it can involve a lot of resistance and even rejection to act on your Heart Choices.

Making this album was definitely a Heart Choice for me. After a long period of working half-time teaching and working half-time on my songs, I could no longer ignore the need to express myself through the songs in a more wholehearted way. So I decided to quit my teaching job to get more time for recording and releasing this album. Since many of the songs contain the message of choosing to listen to your heart, I felt that this was the right title for the album.

“Every Day You Have a Choice”, the first song on “Heart Choice”, came to me in the middle of the night. I woke up with the two melody lines of the chorus in my head, knowing that this was important. The feeling of importance was so strong that I got out of bed and recorded them before I went back to sleep. The next day I listened to the recordings and wrote the verses and the bridge. I am happy and grateful to have birthed this song, which I consider a significant message both for me and for humanity – a message about the importance of taking responsibility for our own life and our own actions, instead of blaming others.

When I decided to quit my teaching job, it was in some ways a hard choice. I had to accept a way of living which both economically and socially was a lot more unstable and insecure. I had to say goodbye to a lot of beautiful people and exciting teamwork and hello to a life where I alone am the captain of the ship. And I had to take the risk of expressing my true self to the world, fully aware that some people will like it and some will not.

But in other ways the decision was a really light and easy one. When your heart tells you what to do, you just know that it is true, and you don’t have to waste time on all the “if’s”, the “why’s” and the “wherefore’s”. It just feels right, and you get the help and the fair wind that you need. This is what I experienced in my new freelance life and in my work with this album. All the wonderful musicians who contributed to the album have created a musical universe with exactly the kind of transparency and variety that I wished to create. Each of the 11 songs has got its own soul and identity, exactly as they deserve.